How to Identify Which Windows on Your Cleveland, OH, Home Should Be Replaced 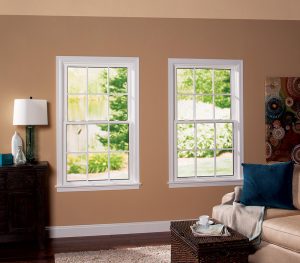 You windows don’t talk. Unless of course your house is haunted, in which case you’ve got bigger problems than energy efficiency. But just because your windows don’t talk, it doesn’t mean they can’t still tell you when it’s time for them to be replaced. Below are some of the most common signs to look for that can help you identify which of the windows on your Cleveland, Ohio, home need to be replaced.

You Can Feel the Cold Coming Through

Studies show that as much as 25% of the heated air from within a home escapes through the windows. If you feel a chilly draft when you walk by any of your windows or if you can feel the cold outside air when you touch the window frame, then that window is probably letting way too much heat pass through it, and it’s probably time to have it replaced.

They Are Difficult to Open or Close

If you have a hard time opening and closing your windows, there’s a chance they’re either worn out or were not probably balanced when they were installed. If your windows are vinyl, then it’s more than likely a balance issue. However, if your windows are made of aluminum or wood, then it might mean that they’re starting to rot or rust on the inside.

They’re Not Much to Look At

Sure, looks aren’t everything, but if your windows are worn-out, warped, cracked, or otherwise unsightly, then you could probably stand to replace them. After all, new windows will improve your home’s appearance both inside and out.

If the windows on your home are more than 20 years old, there’s a good chance they might be made with single-pane glass. In this case, even if you don’t feel significant drafts when you pass by them or if they’re not necessarily ugly or hard to operate, they still might still warrant a replacement due to the fact that new windows would be more energy efficient.

When replacing the windows on your Cleveland-area home, you’ll want to choose new windows that not only look great but are also built to perform in the face of harsh Midwestern winters and are backed by solid warranty coverage. In other words, you’ll want to choose Sunrise replacement windows. Click here to find a Sunrise dealer in your area.

We take a great deal of pride in the quality of our products and the workmanship that goes into them. Our windows won’t just give you an amazing view—they’ll enhance the way you see the world around you.

See the Sunrise Difference
Custom designed & Crafted in The USA
Homegrown and handcrafted, from our family to yours

From using responsibly sourced materials to recycling vinyl and aluminum scrap created by our manufacturing process, we’re constantly on the lookout for ways to make our products and processes as sustainable as possible.

Sunrise windows are expertly engineered and meticulously crafted to provide many years of reliable performance. However, if any part of your new windows does not live up to our quality standards, we’ll be happy to replace it.

I had Sunrise Windows installed in my home in 2000. We started noticing some of the wood lament on the windows started peeling. Sixteen years later, Sunrise honored their warranty and replaced every window. This is a stand-up company.

I purchased Sunrise Windows last year for a house I was flipping. I believe the windows were a big reason the house sold for nearly 100% of the asking price. This is a great company. I would recommend this company's products to anyone.

A company that honors their warranty! I had their windows since 1996 and the company still honors my warranty. Great windows. Great company. Thank you Sunrise!

Installed 30 replacement windows and 2 sliding glass doors in Raleigh, NC. No leaks, no condensation, nearly perfect inside and out. Some windows were larger than 5x5 and still no problems. No more drafts and lower hvac costs. Real quality. Check with experts who engineer glass, as I did. They look great and visitors actually notice and comment. Just a happy customer. Nice job guys!

As a window salesman who can sell Pella, Marvin, and Andersen windows as well, I can say with confidence that the Sunrise Window is a better option than any of those window brands. Most of the negative reviews I have read about the Sunrise product, is because the homeowner is uneducated on how condensation works, or the fault of the installer. If Sunrise makes a mistake, they will always fix it. Best window company to deal with and best warranty out there.

I had ALL my windows and both doors replaced at the same time to my older (built in 1958) home by the folks at Sunrise and am very satisfied with the selection, service and installation! I’d recommend Sunrise to anyone renovating their older home.