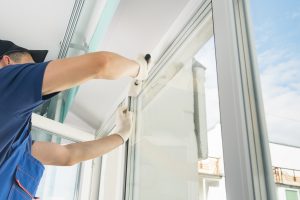 To repair or replace your windows—that is the question. And the answer is, it depends. While some people who can afford it are quick to get rid of a window that might not be looking or functioning its best and replace it with a new one, there are some instances where repairing an existing window might be a more appropriate course of action. And for others, who might not have as much disposable income, if an issue they’re having with their windows can be addressed with a quick fix, then Hallelujah! Below are some common scenarios we’ve compiled to help you determine whether the windows on your home in the Minneapolis-Saint Paul, Minnesota, area should be repaired or replaced altogether.

If the frames of your windows are looking worse for wear—if the exterior surface is chipping, peeling, or fading—then you can probably get away with just repairing them. All it will take is some scraping, sanding, and refinishing and your windows will look good as new. Even if DIY projects aren’t your cup of tea, there’s probably a ton of local professionals who would be happy to take this job on.

If there is condensation between the panes of glass on your windows, it’s probably best to replace them. Condensation inside the windows is an indicator that the window’s seal has failed. Not only can this be unsightly, but it also means the gas fill that was in your window has likely leaked out and therefore your windows won’t be as energy efficient as they’re meant to be.

If the glass is simply dirty, but not fogged up from the inside, then all your windows need is probably a good old-fashioned scrubbing. If the sashes don’t tilt inward, then you might have to get up on a ladder (or pay someone else to) and clean the outside of the sashes, which can be taxing but surely beats needing to have new windows installed.

Older windows, especially those made of wood, tend to absorb moisture and then shrink and swell with temperature fluctuations which can prevent the window from performing as it should.  If the frames on your windows are warped or swollen and you are having issues opening and closing them, a window replacement is probably in order.

If you’ve determined that it’s time to have your windows replaced, click here to locate a Sunrise Windows dealer in the Minneapolis-Saint Paul area.