There are many different styles of windows available, but they weren’t all invented simultaneously. Just like different house styles, they came about over the course of many years. As such, certain window styles are historically more common in certain house styles as their aesthetics and functionality complement one another. That said, there are no real right or wrong windows to choose for your home (if you want to outfit your log cabin with turquoise hopper windows, then by all means, go for it!). The following are simply examples of the most common pairings of windows and home styles. 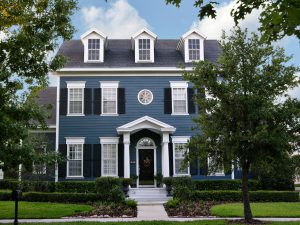 Colonial Revival homes draw on centuries of architectural tradition to impart a stately aesthetic, so it’s only fitting that they feature windows that are equally traditional. Double-hung windows, with their timeless style, are an excellent choice for Colonial Revivals as these homes have symmetrical facades with evenly spaced windows. What’s more, because these homes often have a fancier flavor, dressing the double-hung windows up with grilles and ornate hardware can add a nice flair.

Victorian homes were designed to be the embodiment of opulence. They are often larger than other home styles and incorporate dramatic angles and ornate details such as scrollwork, dentil trim, porticos, and turrets. As such, they beg for windows that are equally showy. Bay and bow windows are always a great option for Victorian homes, as they convey the grandiosity and indulgence of English Renaissance architecture. Why settle for one window when you can put many windows together? Of course, these styles aren’t entirely for show; there is a practicality to them as well. Early Victorian homes were built before the advent of electricity, and so larger, more expansive windows were helpful for allowing more natural light in.

While this style dates back to the 1920s, it wasn’t until after WWII that ranch-style homes really started popping up all over the U.S. They weren’t overly fancy like Victorian homes, but instead focused on utility and economy while still offering charming coziness. One of the most notable features of ranch-style houses is that they are typically only one story, so the windows they feature tend to be wider than they are tall in order to maximize wall space. Options such as slider windows, picture windows, and casement windows are all good choices for this style of home as they provide ample functionality while remaining modest in appearance.

If you don’t know what mid-century modern style is, just think of the show Madmen—homes with open floor plans, clean and simple lines, very streamlined, somewhat minimalistic. While the colors may have been loud (orange shag rugs, lime green paisley wallpaper) the architecture was much more understated. The simplicity of mid-century modern design was actually a direct response to the overly ornate styles of Victorian architecture. And whereas large, multi-dimensional windows were common in Victorian homes, the mantra of mid-century modern style was simple, simple, simple. As such, picture windows, casement windows, and sliding windows featured heavily in mid-century modern homes because of their sleek, low-profile frames and their expansive glass viewing area, which was unobstructed by sash rails, muntins, and other decorative elements.

There are many considerations that go into choosing windows with a particular frame material, such as price, performance, and aesthetic. Identifying which of these aspects is most important to you can often make choosing a material for your replacement windows easier. For instance, vinyl windows tend to be on the more cost-effective end of the spectrum. That’s not to say there aren’t expensive vinyl windows and inexpensive fiberglass and wood windows, but generally speaking, vinyl is a more affordable option due to its availability and the fact that it can be more easily molded into different shapes. Vinyl windows are known for being low-maintenance and having natural insulating properties, both of which make them a very attractive window option. 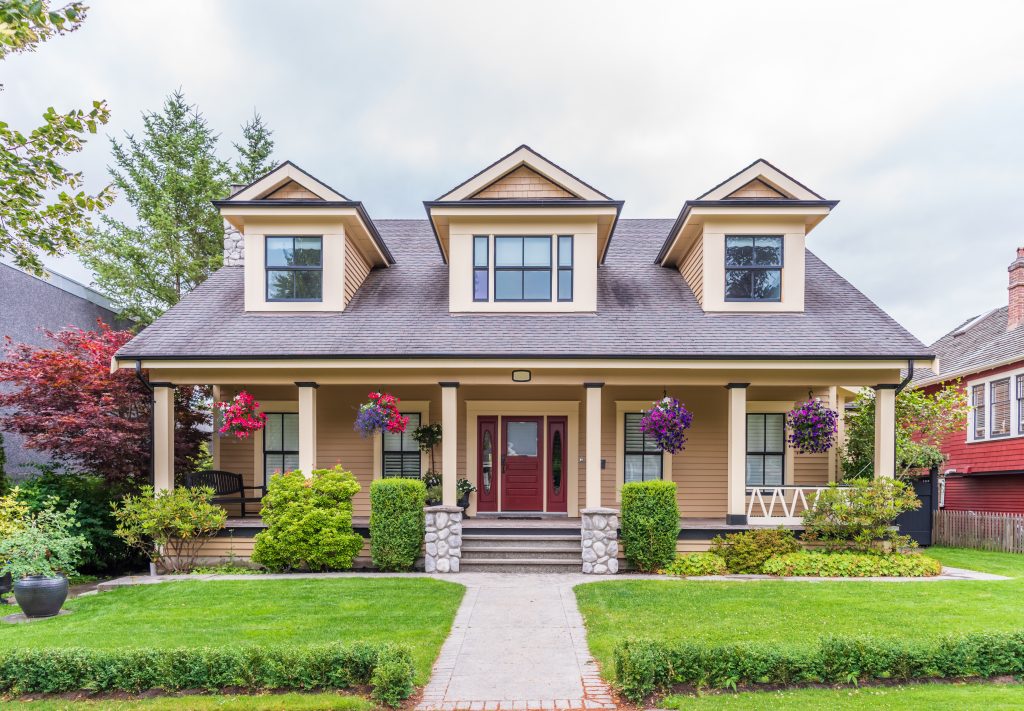 Fiberglass windows typically cost a bit more than vinyl windows, but they have some unique features that make them a favorite of homeowners. For instance, fiberglass is often touted as the strongest and longest-lasting window material on the market, so in the long run, that extra out-of-pocket investment can be worth it. Fiberglass windows are also extremely rigid and won’t warp or twist, even in the face of extreme temperature fluctuations. And, unlike vinyl windows, fiberglass windows can be painted several times, which offers more flexibility when it comes to changing your home’s appearance.

Wood windows tend to be on the more expensive end of the cost spectrum, and they also require more upkeep—such as periodic scraping, sanding, and painting or staining—both of which make them a less popular option than vinyl or fiberglass. However, if you’re the DIY type, you might not mind the occasional upkeep. And many homeowners are willing to spend a little extra to get authentic wood windows because they feel there’s something about the warmth and richness of natural wood that just can’t be simulated.

Other homeowners choose wood windows because they live in historical homes and they want to retain the home’s authentic appearance. In fact, some historical societies require windows and doors to be “of the time” that a home was built in order to feature that house on their registry. So, if preserving your home’s historical accuracy is a concern of yours or a requirement of your local historical society, wood windows are your best bet.

Hot pink, lime green, electric blue—these are all great colors for jellybeans and running shoes, but when it comes to choosing colors for your home, it’s usually best to stay within the realm of the neutral palette. Vinyl windows typically come in white and off-white, and this is a great option because it goes with just about everything. The default color for fiberglass windows is often black or very dark brown or grey, which, like white, are universal enough to go with any style of home or decor. However, as mentioned above, fiberglass windows can be painted, which makes them much more customizable. For instance, you can paint the outside of your fiberglass windows a rich hunter green to match your home’s rustic motif, while on the inside, the window frames can be painted a different color in each room to create distinct decorative motifs. 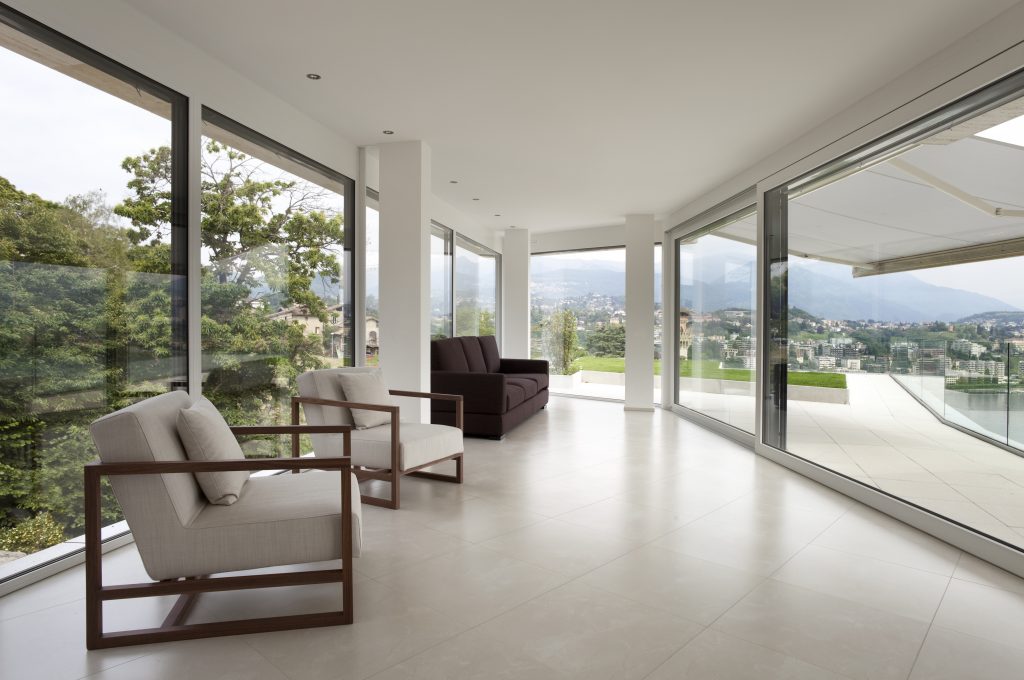 Many homeowners prefer to go with a woodgrain finish instead of a solid color as this can add warmth and richness that work especially well for homes with a traditional aesthetic. As mentioned before, those trying to keep their windows historically accurate to the time period during which their home was built often lean toward wooden windows. However, sometimes a very authentic-looking woodgrain-style veneer on vinyl or fiberglass windows may be enough to achieve this old-time look as well as satisfy your local historical society’s stipulations. When it comes to woodgrains, there is a wide spectrum of tones ranging from dark, chocolate-colored woods such as walnut and rosewood, to honey-colored woods like teak and maple, and those with reddish undertones like cedar and mahogany. The richer tones—the dark browns and reds—are more commonly seen in Victorian and Colonial homes, whereas mid-century modern and contemporary homes tend to favor the blonde and honey-colored woods.

Decorative elements such as grilles, fancy hardware, and designer glass can be great for imparting a unique flavor into your home’s style. However, it’s important to remember that the more “unique” something is, the fewer people it might appeal to. That said, if you’re planning to sell your home anytime soon, you might want to hold off on having fleur-de-lis etched into every glass panel until you’re in your forever home. Grilles can add a touch of elegance to your windows, but they’re definitely not as common as they used to be so they’re often best reserved for homes like Colonial Revivals, Georgians, and Tudors. Tudors in particular, often feature diamond-shaped grilles that impart a “cottage-style” aesthetic.

Get Started Today With Sunrise Windows

We hope that you’ve found this overview of home styles, window styles, and customization options helpful in your quest to choose new windows for your home. However, if you still have questions, or if your home does not clearly fit any of the particular home styles we listed above, we suggest you reach out to a professional window company authorized by Sunrise Windows for more assistance. Sunrise Windows offers a wide selection of high-performing replacement windows that can be extensively customized to complement a variety of homes. Sunrise authorized dealers have in-depth knowledge of the features that make these windows so special and the many benefits they will provide you with. To get started, click here to locate the nearest Sunrise Windows dealer in your area.