Years ago the home improvement company that I worked for got a call from a homeowner wondering why they had drafty windows. So they set up a time for me to go out and visit with the homeowner. I was amazed at what I found.

Chances are you can relate to the issue…drafty windows are one of the main reasons homeowners choose to replace the windows in their home. Sure, there’s a cost savings component to be considered. Bob Vila quotes the U.S. Department of Energy as saying reducing drafts can result in energy savings that range between 5 and 30 percent per year. Certainly nothing to sneeze at.

But maybe more of the concern is your level of comfort in your home.

When I got to the home that evening, the couple invited me in and after a bit of small talk I asked them to show me some examples of their drafty windows. They took me first to the master bedroom. Their bed was up against the wall and flanked by two double hung windows on each side.

I was a bit confused. It was the middle of winter, but it appeared the windows were open slightly as the drapes were moving. In addition, there were space heaters strategically placed beside the bed on each side, just in front of the windows.

Noticing the puzzled look on my face, the husband asked me to open one of the drapes…the window was completely closed, but now that I was behind the space heater it was obvious that a cool draft was present.

Why Are Windows Drafty

This might sound like an extreme case, but this was similar to situations that I witnessed over and over. But why?

Installation is the first place everyone goes with the air leakage conversation. Certainly, if a window isn’t installed correctly in a replacement situation, or the rough opening wasn’t insulated properly when the window was originally installed, drafts can result.

Age is also a factor, as these were the same wood windows that had been installed when the home was originally built. Old wood windows, for example, are known for shifting and changing shape due to moisture, etc., affecting the original seal.

Window type and style also come into play. The double hung window, far and away the number one window type used in homes all across the country, is probably the draftiest of all. Think about it…you have two movable sashes with plenty of opportunity for air to leak into a home.

You’d certainly think so, wouldn’t you? But let’s look and see… 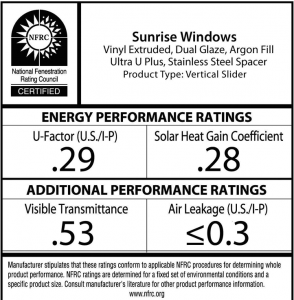 The NFRC (National Fenestration Rating Council) is the organization that tests and certifies fenestration products (windows, doors and skylights) for certain performance criteria. When your new replacement windows are delivered to your home for installation, you should see this sticker attached. In addition to other performance information, take a look at what the NFRC says about the Air Leakage rating.

Items of interest include:

Why Does All This Drafty Window Talk Matter

Let’s think through how important this information is. The Department of Energy has estimated that a gap as small as 1/16” in the window assembly leads to air leakage similar to removing a brick from the side of your home. With say 20 windows in your home, one or more in each room, you could see the effect that drafty windows would have on energy cost, equipment wear and tear, and overall comfort.

Of course, replacing your drafty, old windows with new ones would take care of all that, right?

Think about it for a minute…why measure for draftiness at all if all replacement windows are the same?

The NFRC specifically says that there is a range of Air Leakage rates.

Next time we’ll deal with how you can use all this information to decide whether or not your new replacement windows are almost as drafty as the ones that you have as well as how we were able to take care of that homeowners situation.